The following article and photo courtesy of the Knights of Columbus "COLUMBA" January 2014
Members of St. Volodymyr Council 15800 stand with Major Archbishop Sviatoslav Schevcuk, head of the Ukrainian Greek Catholic Church, at the Patriarchal Cathedral of the Resurrection of Christ in Kiev, Ukraine 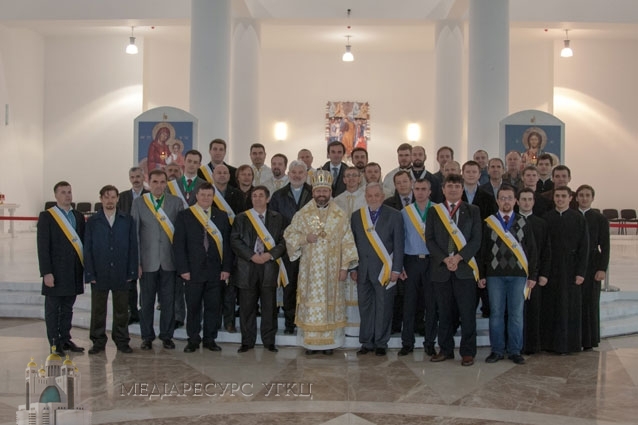 ​On Nov. 6, 2013, Major Archbishop of Kyiv-Halych,  Sviatoslav Schevcuk, head of the Ukrainian Greek Catholic Church, led a Divine Liturgy in Kiev, Ukraine, to celebrate the creation of the first Knights of Columbus councils in that country.  As announced at the 131st Supreme Convention in August 2013, the Order established two councils in Ukraine and a round table in Lithuania, constituting the Knights' first international expansions since councils were established in Poland in 2006.
In his homily, Major Archbishop Schevcuk expressed joy regarding the establishment of the Order in Ukraine.
"Knighthood has always been the builder of the future, for it lays the unshakable foundations of personal, family and community life," the major archbishop said.  "The Knights of Columbus was established in order to live out the Gospel within the complex social structure that prevailed in the United States in the 19th century.  We rejoice that knighthood is taking root in the life of our Church."
To date, more than 600 Ukrainian men in 13 Councils have joined the Knights of Columbus, including laity, priests and bishops.  After the liturgy, Major Archbishop Schevcuk participated in an organizational meeting for St. Volodymyr Council 15800 that focused on how to effectively communicate the Order's principles to "the Ukrainian soul."